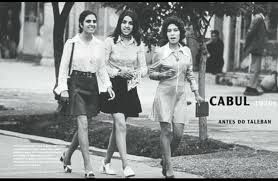 Today is the international day of the woman's rights! You know it because the radio tells it, and also the TV and also your social medias tells it to you but even if it's very fashionable to make international days for everything it doesnt have any means at all!

Yes my last sentence is shocking but following the logic behind these international days we must pay attention to the things only during the day we "celebrate" them. But I'm the kind of person who think that's not only on the Saint Valentin's day that you must love someone, I think also that the international Man's day is everyday in a few countries (because phallocratics countries still exist), we can only knit in public on the internation day of knitting in public (yes, it exist... trully), that violences against women happens just during the day against them and that we must be kind and respectfull with women and their rights ONLY during the international day for the women's right!

It seems that I'm not the only one thinking about the ridiculous into this situation. Connecting with the social media I see not one but four stories of women hitted, misrespected by their ex boyfriend/husband, discriminated into their rights and turnes into things or sexuel slaves.

This kind of true stories must not be pushed in front of people ONLY today, these stories must be tell to the people EVEN today: that means that we must speack more about these, making sensibilisation, beginning into schools where everything begins (we have all this memory about a little boy who have fun looking under our skirts and when we were complaining to an adult they were telling us that was nothing or worst... That was NORMAL!!! 20 years later the little silly boy is a man and he didn' change anything in it's behaviour because no one tells him it was bad).

Same thing about wages differencies, discriminations, everytime the same kind of work offers to women, the glas roof,... When are we talking about except during their international days??!

People who know me well will ask why I'm complaining about. They will asked the question because I'm lucky and I know it. I know it when it's time to wash the dishes, to cleanthe floor. I see it when I feel bad and even if my man want much more than a hug he will take me in his arms, telling me he loves me even if he have four time the strengh to force me to have what he wants; he didn't! Never! I'm lucky, like a minority of women in this world, to be loved like I am, to be respected and helped by the man I love!

Since we are together I never clean the house alone, we share the things to do, cooking together or not it depend of wich have more inspiration (my fiancé made a gorgeous sauce with cream infused with thyme! It's really delicious!) and we respect each other as a entire person, different but complementary. Him, huge fan of quantum physics and me the creative one who make "great things" (according to him) with a piece of fabric and 20 cm of wire.

I actually dont have a job but when I was having one he was supporting me, helping me when I was tired and near of burn out (I made one... just at the time I lost my job...) and I believe that the syndical fighter that I love (my man is having a few "jobs"! It's Superman! The hero of all the men! He's even able to cook a good meal, discussing something, following the rugby match DURING we tidy the fod shopping!) will look after me and my rights and he will made it even if I'm too tired to make it myself, if I dont have the envy or if I have abandon the idea to make the things better.

Knowing that makes me sure of myself and I walk to my future being sure of myself because I know that if I fel his shoulder will be near for me to rest on it and his strong hand will take mine and make me walk again on the big hard way fulle of problems that we call "Life".

I'm conscious of my luckyness! But I'm not blind to the pain of the others and I'm touched more because I know there are solutions; men on the same model than my fiancé exist (and the men like this that I know are often single): respectfull and loving but.. single! So it is possible to raise a little boy to make him a good man! It is possible to change these bad things but for that we must fight! We must everytime, everywere fight for our rights, everyday! Because every good thing, even if we think it will be forever can disapear! Need an exemple? 40 years after what's left of the freedom of the 70's? Nothing! Afghan woman have lost every freedom they were having. The reason: Their society is managed by men, for men all the decisions are taken by men!